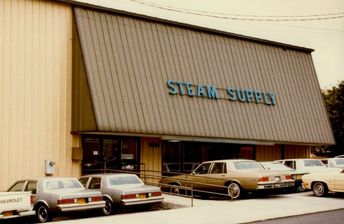 ​Steam Supply and Rubber Company was founded in 1915 by Virgil W. Yates, who managed the company for 51 years while building the firm on a foundation of offering the highest quality products and insisting upon the finest service to his customers. One aspect of this service included making deliveries by trolley car or bicycle from the original location on 79 Washington Street.  Steam Supply relocated to the Pioneer Square area of Seattle in the early 1920’s, a historic location we occupied for over 50 years.

Mr. Yates' son-in-law, Gordon McKinstry, joined the company in 1929 and was instrumental in expanding the sale of valves, hose, gauges and instrumentation. The ensuing years saw Steam Supply develop into a major distributor to the food processing, laundry, hospital, manufacturing, steamship, petrochemical, forest products, and power industries throughout the Northwest. Mr. McKinstry assumed the company management in 1966 and was in turn joined by his son-in-law, Bowen King.

The 1970's began the expansion years of Steam Supply which started by moving into a 50,000 square foot building on South Alaska Street, and opening branches in Oregon and Alaska. In 1974, the first computer was purchased allowing for modern inventory and accounting controls as well as sales and service analysis functions.

Following 47 years with Steam Supply, Mr. McKinstry retired and Mr. King assumed the company management in 1976.  He continued with the expansion process in the 80's and 90's by moving into California and Colorado and operated valve repair service centers in many of the locations.

In 1997, Steam Supply was purchased by Innovative Valve Technologies and became part of a publicly traded company with multiple locations throughout the United States providing products and maintenance services to industrial customers.

As the 90's came to a close, Innovative Valve Technologies was purchased by the Flowserve Corporation. The Seattle office of Steam Supply was merged into a large service location in Tacoma, WA, as the business focus was moving toward more emphasis on maintenance services.  Shortly thereafter, the Steam Supply name was dropped in favor of the corporate identity.

With a desire to get back to the original roots of the company, a small group of long time Steam Supply employees decided 2004 was the year to form Steam Supply LLC and get back in the Seattle industrial market once again as a small, privately owned company with a focus on the same basic principles that Mr. Yates, Mr. McKinstry, and Mr. King originally emphasized.

In 2015 Steam Supply celebrated 100 years of service in the industrial marketplace. Although the business has evolved through the years, all of us with Steam Supply maintain the original standards and goals of providing top quality products and excellent service to our customers.  At Steam Supply, our reputation is what defines us.